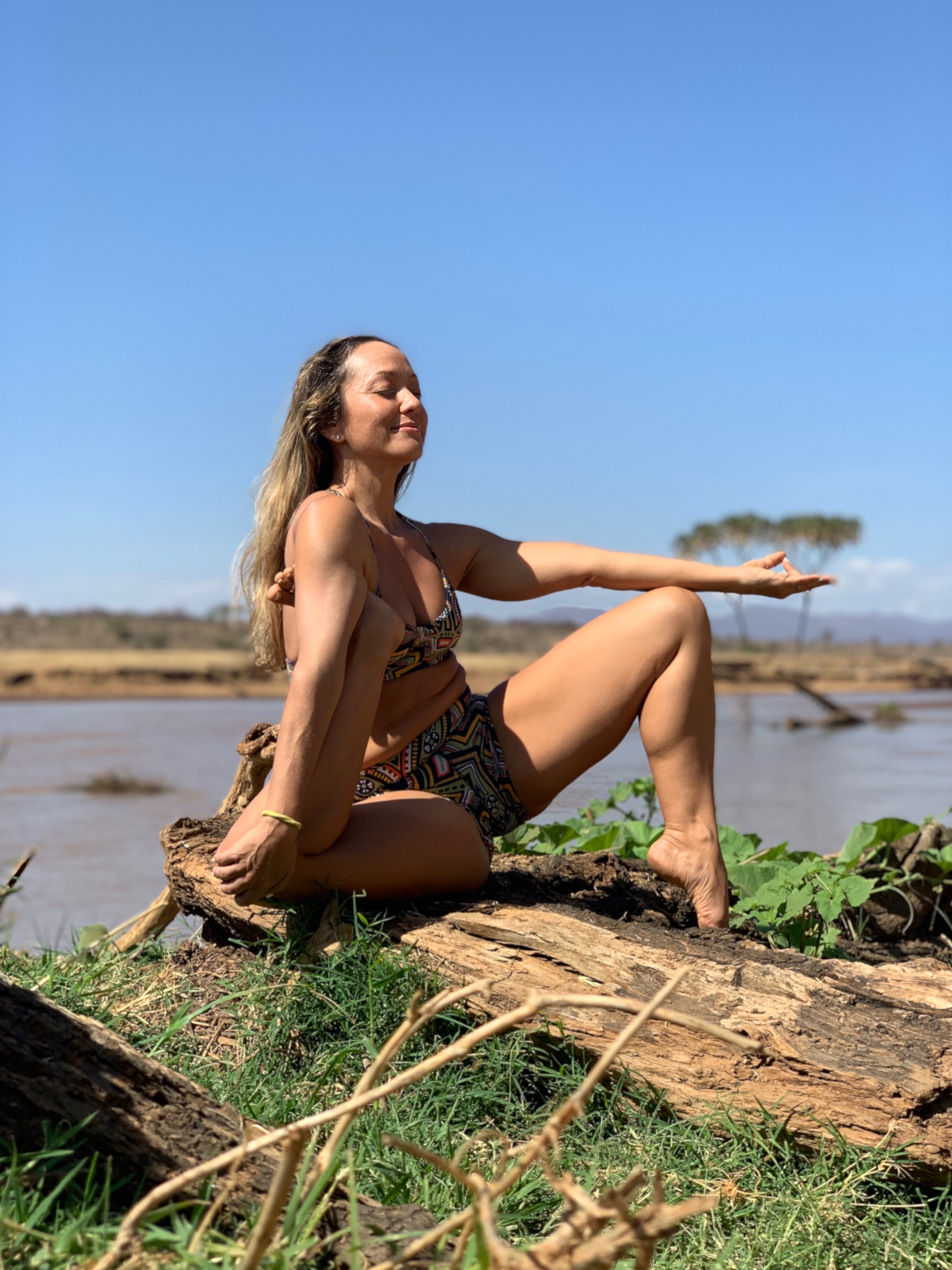 Yoga on Safari—Lessons From the Lions of East Africa

It’s late at night and I’m having trouble sleeping, being woken up every few hours by the sound of growls. At first the sounds filter in as indistinct muffles but then they quickly accelerate and intensify. I realize that there is not one but two creatures participating in what can only be an act of mating. There is a crescendo and a quick descent into silence. These are the sounds of lions mating in the Masai Mara.

I’m shocked by how close the primal sounds are. The first time the lions go through their ritual of seduction I assume that they would spend the rest of evening cuddling, hunting or sleeping. But, to my surprise lions mate continually when in heat, sometimes mating up to 4,000 times in a week. Suffice it to say that I got very little sleep in my tent and I wasn’t bothered one bit by it.

Safaris happen exceeding early, even for yogis. You are often advised to be in the Jeep at 6 AM. Since the lions had me awake already most mornings in the Mara, I did what any good yogi would—I practiced. The sounds of the roaring mating lions were surreal. I was disappointed that there isn’t a Lion Pose in the Ashtanga series because that would have been just too perfect. I wasn’t about to start practicing Lion’s breath lest the wild beasts decide to penetrate the tent in search of a new partner. I was happily in Downward Dog behind the canvas walls, warming with my basic Cat Pose. Later that same morning, a female lion trotted directly in front of our tent being pursued enthusiastically by a male lion. Had the lions not been so interested in each other it would have been nothing short of terrifying.

The Masai Mara, known locally simply as “the Mara”, is a large wilderness reserve on the border of Kenya and Tanzania, in the Serengeti. “Mara” means “spotted” in the local Maasai language and this area beats that name due to the solitary trees that spot the open plains. It is everything you think it should be, and more. Herds of wildebeests, zebras, giraffes, gazelles, impalas and hippos graze in abundance. They are so ubiquitous that the local safari guides rarely want to stop and view them. The “hunt” is usually on for the big cats—cheetahs, leopards and lions. Rhinos are so rare that spotting one is akin to unicorn gazing. We saw all three big cats in a short time, but no rhinos. There was the early morning leopard prowling through a wide swath of land, a group of male cheetahs who banned together to hunt larger prey and lions like large house cats sprawled all over the Mara, sleeping, eating, hunting, stalking and, yes, mating.

We stayed at Sala’s Camp, which is part of the luxurious Safari Collection that includes the iconic Giraffe Manor in Nairobi. Before I continue, I should redefine what the word “tent” actually means. The Safari Collection calls its safari set-ups camps. When I first thought of going on a safari and sleeping in a tent in Africa, I conjured up images of Karen Blixen from Out of Africa. Little did I know that five-star tents exist and I would be staying in one. At both Sala’s Camp and Sasaab in Samburu, we stayed in “tents” that were permanent structures consisting of private bathrooms, terraces with pools and nearly 1,000 square feet of living area. Canvas walls are buttressed with solid beams, glass doors and a sprawling roof. Without sounding like a total princess, this is my kind of tent.

The lions we saw in the Serengeti are a true blessing to the world, or at least, that’s how my Western privilege sees them. In times past, lions were both respected, revered and feared by the local tribes of Kenya and East Africa. There was a time not too long ago when there were over 200,000 lions in Africa. Fewer than 20,000 lions remain in Africa today. This decline happened only within the last 100 years. Lions sometimes prey on the livestock that the Masai and Samburu people live off. Rarely, but on certain occasions, the lions will even stalk small humans as prey if they’re walking on the plains without adequate protection. From my position in this whole nature scene, the lions were only artifacts of nature’s wild beauty. To the local people they were a fact of life.

In traditional Masai culture, lion hunting represents a demonstration of male warrior power. Sometimes a lion hunt was initiated to find a lion that preyed on village livestock or endangered human life. The ancient rite of passage for a male Masai warrior was to engage a lion in one-on-one combat with only a spear and emerge a victor. The lion’s paws, mane and tail were collected and treated as sacred artifacts. No matter how cute and cat-like they seem lions are wild animals with a kill instinct. They are large predators and humans must treat them as such.

It’s no secret that illegal poaching along with urban development and encroachment on wildlands has decimated the lion population. Today in Kenya there are only a fraction of the lions that once populated the region. Kenya has banned all wild animal killing. However, in neighboring Tanzania, poaching rights can be bought through government bribery. It’s mostly wealthy foreigners that shoot lions and other wildlife, called “game”, from the safety of Safari jeeps. As you probably surmise, I’m highly critical of this practice. Not only do I find it a heinous act of exploitation, but I also find it an unfair fight. To sit in the safety of a motorized vehicle and fire a weapon of mass destruction at an animal who doesn’t know he’s being hunted is just not equal odds. Human beings are, in my opinion, the most dangerous species on the planet.

When Westerners visiting Kenya hear that the Masai kill lions they sometimes shake their heads in judgement. I find this also unfair. Who are we to criticize a culture that has an ancient relationship with this big cat? It’s easy for us to sit in our cozy apartments and say that lions should be preserved. Globalization and modernization are certainly exports championed by the Western countries. Ever-expanding cityscapes encroach on wilderness but also offer economic opportunities and jobs for local people. It is not as simple as to say that urban encroachment should be stopped.

Big game trophy hunting, often done illegally with bribery shielding the hunter, has severely negative implications for wildlife populations. It is often reported that game hunters seek out the largest male lions to shoot and, as such, the average size of lions has decreased over the last 100 years. Up until 2016 it was illegal to bring animal carcasses killed for trophy hunting into the U.S. That changed with the current President and unfortunately some individuals have traveled to Africa to literally shoot a lion. Social media rage highlighted the heinous act of a dentist from the U.S. who illegally killed a famous lion in a wilderness reserve. While it’s easy to shame and blame one person, it’s the culture and the laws that embolden individuals to take action such as this. We, citizens of the U.S.A., can learn a lot from the Masai.

Whereas in the past the Masai warrior culture included lion hunting as a rite of passage, that has changed. Anthropologists and conservationists have had the most impact by learning from the Masai what lion hunting actually represents for them. Organizations such as Lion Guardians  use access to resources and education to work with the Masai to honor their culture and help save the lions or Kenya. Now, instead of lion hunters, the Masai have become lion guardians. While the Maasai do sometimes come into conflict with lions and have to kill a lion out of self-defense, their relationship with the large cats is far more complex than poachers and includes many positive dimensions. By including Masai narratives, conservation organizations are able to embrace the nuanced ways in which the Masai relate with lions.

In coordination with Lion Guardians, the Masai stop an average of 50 lion hunts per year and track lions using radio telemetry. Naming lions is also a way that a warrior becomes a protector of the lion. By recovering lost livestock, reinforcing local homes, and finding lost herders, the Masai fulfill their ancestral warrior duties of protecting their communities while helping to also protect the lions. Each safari tour has two guides— a driver and a spotter. In all our trips and at all our camps, both positions were held by Masai and Samburu warriors. These warriors grow up in traditional cultures and then go to school and study to receive guide certification from the Kenyan government.

There are many lessons to learn from the Masai and their lions of the Serengeti. Perhaps there is a way to ask the question with understanding what a foreigner seeks to gain from shooting a lion. Would there be a way that the would-be hunter could be recruited as a conservationist instead? Would taking a photograph and devoting funds to lion preservation be as satisfying as killing the magnificent being for sport? With the right education, maybe so. Sometimes conservationists need to tranquilize a wild animal to apply a tracking collar. Perhaps foreign hunters could be encouraged to go on these trips and, instead of shooting the animal dead, help tranquilize the lion so it can be tracked and protected. But of course, if importing the animal’s carcass is illegal in the U.S. and other countries, then the sport lion hunter would not be permitted to carry his/her prize home. That in and of itself may decrease the amount of hunters that go through the illegal procedure of shooting a lion.

There are many lessons to be learned on safari. I will carry a deep respect for the ancient culture of the Masai and Samburu people in my heart. My memories of being up close and personal with the lions and all the animals of the Serengeti have only increased my love and appreciation for nature. I am inspired by the work of organizations such as Lion Guardians that seek to understand a culture and work with indigenous people in empowering ways. Perhaps someone in my home country of the U.S. will read this blog and think twice about killing a lion for sport and instead be happy with a really good photo to put on their wall at home. As Richard Rohr says, “the best criticism of the bad is the practice of the better.”

Practice along with me at Masai Mara on Omstars and on Youtube!

Hey there, what’s that you say? I look like a me

When I first started practicing yoga over 20 years

Take your time. There’s no rush. Life is here to

Sometimes after meditation, you may feel pretty pe

The journey of meditation is a life long path of i

Hey there, what’s that you say? I look like a me

When I first started practicing yoga over 20 years

Take your time. There’s no rush. Life is here to