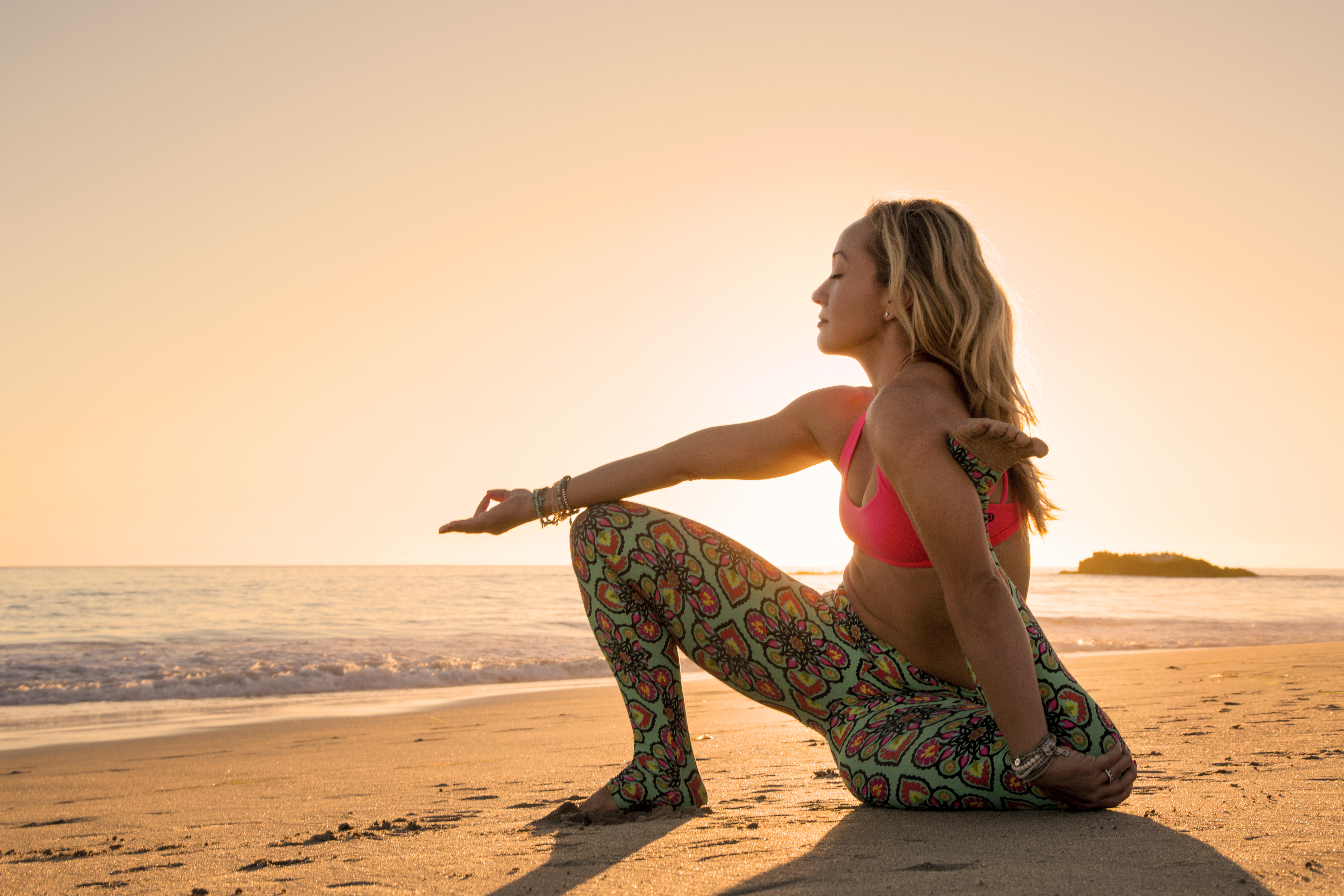 Hint: Yoga is much more than just bending, twisting and lifting the body.

Yoga as it is understood and practiced in the contemporary Western world usually begins with the body. Many students come to the practice in search of physical healing or physical benefits, such as increased flexibility or strength. Others come to the practice thinking it will be a good workout. The body and the yoga poses, known as asanas, are not ends in and of themselves. Instead these are tools used for the cultivation of a more subtle state of mind.

Truly understanding what yoga is can be difficult. And perhaps yoga is many different things to many different people. As a beginner, you may think of yoga as stretching, twisting or bending the body. Some may think of yoga as another fitness trend that promises health. If you skim through media images, you might think yoga is all young, fit, flexible, able-bodied people doing handstands at beautiful destinations around the world. For some aspiring yogis, yoga represents a career path. For the ancient yogis of India, yoga was something much deeper—a path of liberation, a way to reveal the truth about oneself and the world, a vehicle to directly experience the presence of God. And for some dedicated students and teachers of yoga today, yoga may still be just that. Whatever yoga is for you is ok. There is no hierarchy of meaning. It doesn’t matter what brings you to the mat as long as you keep practicing, exploring and learning.

Wherever you are on your yoga journey, I encourage you, as a student of yoga, to answer the question of what yoga is for yourself. When you find out what yoga is to you, then the practice becomes your own and you find agency, depth and meaning in it. But if the practice is always defined by others then you might end up taking on the practice of yoga like just another dogma. Defining the practice for yourself is a crucial step along the journey inward that I believe every yoga practitioner will benefit from. Rules dictated from an authority figure that outline a moral, ethical or physical standard will only go so far and may diminish individual power, choice and agency. If you want to let this practice become fully integrated into your life, then defining what yoga is for you may be exactly what you need in order to delve a little bit deeper into the heart and power of yoga. The more that you practice yoga, the more that the practice impacts your life. It is then only natural that long-term students of yoga understand the importance of making the practice their own while learning how to honor the origins and history of yoga.

While it may seem like a daunting task to define what yoga is, that quest is part of the essential nature of what it means to do this practice. Yoga cannot be divorced from its cultural and historical roots in India. To understand what yoga is to you must include a careful and considered look at what yoga has been to the yogis, sadhus, rishis, swamis, householders such as Brahmins and numerous other spiritual practitioners within India who have tended to the practice of yoga for many millennia. It can be tempting for the contemporary yoga student to say that yoga is whatever they want it to be. For members of the dominant white Euro-centric culture this can sometimes amount to little more than cultural appropriation. When a fit, flexible white woman claims the mantle of yoga and divorces the practice from its Indian and cultural context, the practice is not the result of soul-searching, but instead an expression of systemic white washing. It is just too easy for privileged people operating with the Judeo-Christian paradigm to repackage yoga without any of the historical, textual and factual references to Hinduism under the auspices of personal discovery. The yoga-is-everything culture of appropriation spawns an everything-yoga consumerism whose marketing momentum can sometimes be utterly disillusioning.

There is perhaps another path that we, as students of yoga, may want to consider. To define what yoga is for oneself requires a sincere spiritual investigation of the deepest questions of life and a respect for the culture of yoga’s origin. In other words, it is possible to study the history of yoga and apply the technique and methodology of practice to the contemplation of the definition of yoga itself. The answer to what yoga is can perhaps be found through a combination of study and practice.

Patañjali defines yoga as the stilling of the mind, “yogas citta vrtti nirodah” in Sanskrit from Yoga Sutra 1.2.

Krishna defines yoga in many ways in the Bhagavad Gita, but one of the most well-known definitions states that yoga is to perform your duty without attachment to success or failure and maintain evenness of mind.

The Yoga Vashishtha defines yoga as a technique or remedy to calm the mind, “yoga mana prashmana upayah” in Sanskrit (verse 2.13.47).

These textual definitions differ greatly from the popular presentation of yoga as a fitness routine. Instead, what is quite plainly evident from consulting the yoga scriptures is that the practice of yoga is aimed at the cultivation of inner peace. Yoga is a state of being that is expressed internally. Yoga is not defined in any traditional texts by the postures, aesthetics or other physical manifestations alone. Within the environment of orthodox schools of Indian thought, the defining philosophical principle of yoga can be said to be its emphasis on personal practice. One thing that seems universally evident when speaking of yoga is that above all, yoga is a personal practice. Called sadhana in Sanskrit, the practice of yoga is just that—a practice to be undertaken by sincere spiritual aspirants on a quest for inner peace. Defining what the practice looks like is the work of every yoga student. And yet, according to these texts, the search for inner peace is at the heart of what yoga really is.

So, this is what the scriptures say. Yet still, if you simply read these words and take them on as absolute truth that will end your journey. So, rather than taking these textual references on as the end, I suggest you use these words as reflection points for your own investigation. Rather than tell you what exactly yoga is, I encourage you to delve into the question as a personal exploration. Yoga could be inner peace, healing, love, kindness, truthfulness, surrender, faith, devotion, liberation, and so much more. The answer is less important than the fact that you’re willing to ask the question. In fact, the question itself is the answer, just as the journey is itself the destination in the yoga practice.

In order to encourage every student of yoga to dive into the heart of what yoga really is, I offer a few suggestions below. There are a number of ways that you can begin to unpack what yoga is to you.

There are many books to read that can enrich your understanding of what yoga is. If you haven’t read the key canonical texts, start there.

If you’ve never read any yoga history, then Georg Feurstein’s books are a great classic resource. You could start with the Deeper Dimension of Yoga and then move on to the Yoga Tradition. There is some contemporary critical scholarship that is worth addressing once you have the foundations of a general framework for yoga’s development within India.

Set aside 10-20 of uninterrupted time. Write the words—What is yoga?—at the top of a blank page. Set a timer for the allotted time. Do not think, just put pen to paper and start writing. Do not stop until the alarm sounds. Dump all the thoughts in your mind about yoga out in the journal. Repeat this once a week for at least a month.

Come to a comfortable seated position. Begin with a few moments of mindfulness to settle your thoughts and bring your attention within. Choose a phrase that defines yoga, such as “Yogas citta vrtti nirodah” and repeat that over and over, either in Sanskrit or in the translation to your native language. After repeating the words for a few minutes, drop a word from the phrase until you reach one word that captures the essence of the teaching. For example, in this phrase, you might begin with “Yogas citta vrtti nirodah” and then remove each word, one by one, until you end up with only “nirodah”.

In order to encourage every student of yoga to dive into the heart of what yoga really is, I designed a one month yoga journey called Yoga Is. This all-new video course pairs the spiritual journey with asana practice in a method uniquely designed to spark your inner quest. The challenge is free for the month of January in 2020. Are you ready to find out what yoga really is? If so, then sign up for the challenge and let’s explore the heart of yoga together.

Sign up for my Yoga Is Challenge, launching January 1st!